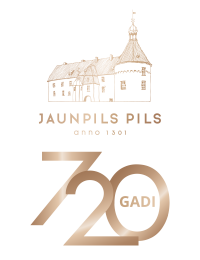 History of the castle

The history of Jaunpils Castle is an exciting story of the past!

1301 – Start of construction of Jaunpils castle, according to the date of JG Arnt. It is an irregularly fortified castle of the fortified order with an inner courtyard surrounded by water. The drawbridge was the only link that connected the castle with the surroundings.

1411 – Jaunpils Castle was first mentioned in the lists of castles of the Order. With the development of firearms, the castle was fortified by adding a large, round defense tower in the southern corner with gutters that have survived to this day.

No 1545. of – Eberhard von Everen, the penultimate commander of Dobele, lived in the castle. The first reconstruction of the castle for living purposes is connected with his name.

1576. year –Matthias von der Reke took over Jaunpils Castle and Jaunpils district, which at that time was 13 square miles in size, as a free property independent of the Duke.

1592 – the construction of Jaunpils church was started.

1605. year – Matthias von der Reke During the battle, Salaspils got into a close fight with King Charles IX of Sweden. Rekes has an expensive and luxurious silver sword and a royal hat. After this battle, about 300 Swedish prisoners of war were brought to Jaunpils, who worked on the construction of a stone wall, which has preserved the name of the builders – the Swedish Wall.

1648. year – On the wedding day of Matthias Dietrich von der Reke and Susanna von Denhof, he presented a luxurious altar and pulpit to Jaunpils Church.

Jaunpils was very busy at that time. A large complex of farm buildings had already been established in the center of Jaunpils.

On the night of 190 to 24, 1905. December – The rebels set fire to Jaunpils Castle. One night, not only the castle and the interior itself, but also the archive of the von der Rek family, a collection of books and paintings, perished.

1907 – Reconstruction of the castle was started according to the project of the German architect VLN Bokslaff.

June 30, 1919 November – Jaunpils Castle and the territory of the manor center were taken over by the new Latvian state and a model farm of Jaunpils manor was established.

1920.-1944. year – Two classes of Jaunpils six-grade primary school were located in the castle.

1997 – the castle becomes the property of Jaunpils municipality.

No 2000. of – Jaunpils participated in the events organized by the Latvian Castles and Manors Association. In the campaign “Let’s tour Latvian castles and manors”, Jaunpils Castle was among the ten most beautiful castles in Latvia.

In 2005 – The castle was included in the list of the 100 cleanest cultural monuments.

Go to the Pub